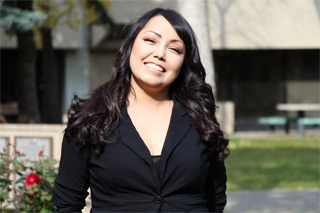 Adeline is Southern Tutchone and Cree. Her industry experience is from Northern Native Broadcasting as an on-air host/producer, and she is a full-time student in Communications Studies for Broadcasting at Mount Royal University in Calgary, AB. Her goals and ambition for broadcasting deeply connect with the surrounding stories that support her community.

Some of Adeline’s achievements include the Dean’s Honor Roll in 2016 and a successful practicum, which included a collaboration to implement a radio station in Fort McKay, AB. When she isn’t studying, Adeline volunteers for Fish Rescue at Buffalo Rock Tipi Camp with Harley Bastien and Whitehorse Aboriginal Women’s Circle, to name a few.

Adeline says an APTN Scholarship will aid her career path by helping with financial difficulties while attending school, loan payments, a laptop for future projects and research skills. 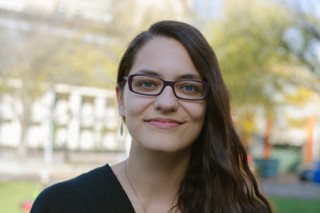 Savannah has family roots in Kinosota, a historic Métis community along the shores of Lake Manitoba. She is completing her Media Production Major in Creative Communications at Red River College and feels at home behind a camera, hoping to channel that interest into a lifelong career.

Whether Savannah ends up creating documentaries, films, or broadcast news, she wants to tell stories that matter to Indigenous Peoples.

Savannah says an APTN Scholarship has set her life on a new path. Now she can focus on her studies without worrying about the expense. But more importantly, Savannah is inspired and honoured by the recognition from the world’s first national Aboriginal broadcaster.