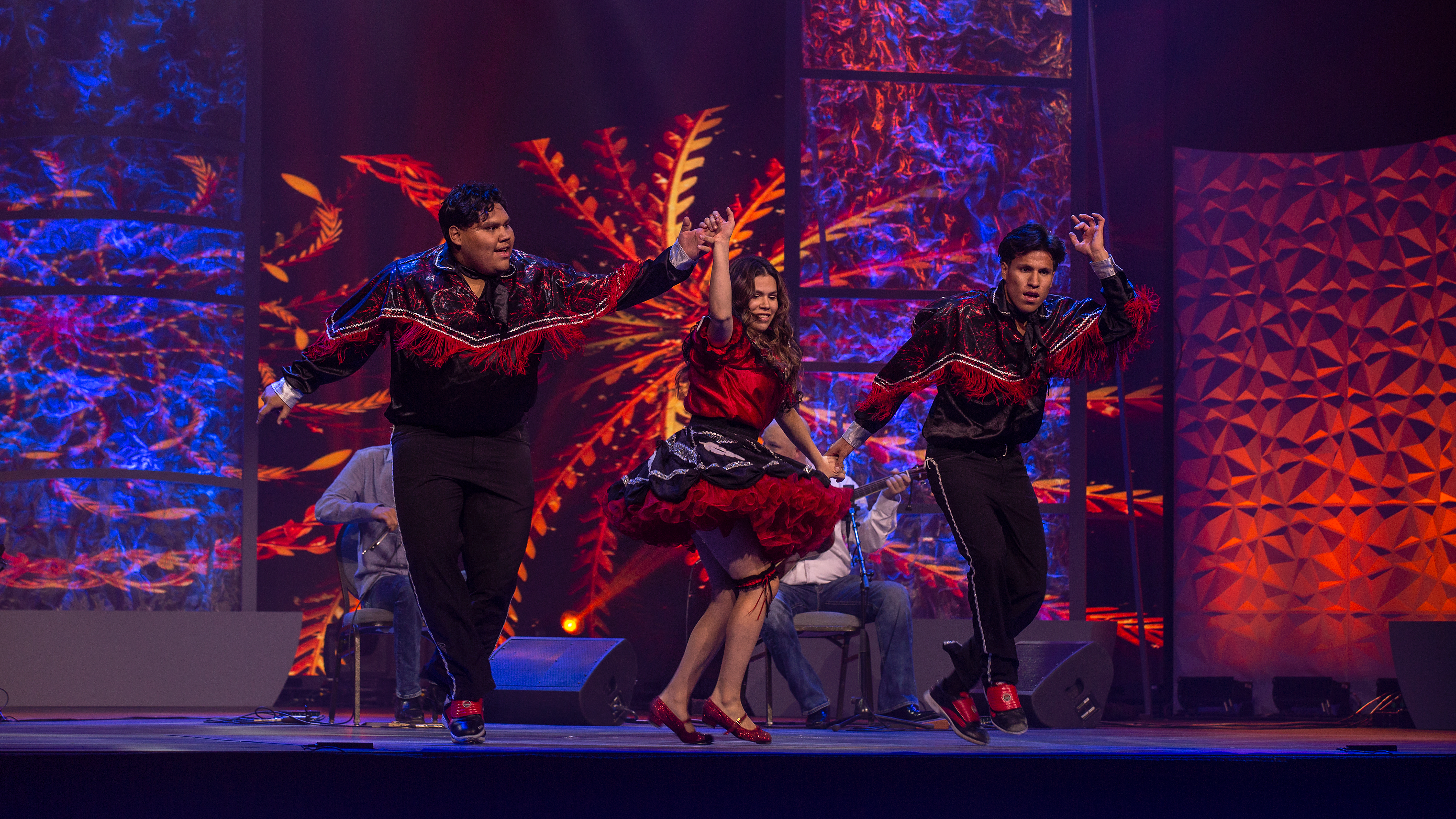 This article was originally published in SAY Magazine on Dec. 19, 2020.

This fall, the recording sessions of APTN Indigenous Day Live Winter Solstice brought together musicians of all stripes. Artists recorded in Winnipeg, Halifax, Montreal and remote locations in preparation for the broadcasts airing December 21-25 on APTN.

Famed Newfoundlander Alan Doyle and Nova Scotian Carolina East shared the stage for their IDL Winter Solstice performance. East and Doyle had performed together in the past and were happy to be reunited.

“To be able to team up with him now and perform in such a professional setting is amazing,” said East.

“I wanted to have a cross section of the various genres of music we play to help with a grand celebration,” said Doyle. “I was also delighted to find a song that Carolina and I could sing together. She’s amazing after all!” Doyle hopes to bring the energy of the stage to the screen. “I would love it if the songs led people to clap and sing along in their own homes. That’s what music did in my house when I was a kid. It brought everyone together.”

East, who also performed at APTN’s Summer Solstice Concert 2020,  was thankful to be included in the winter solstice celebrations.

“For many years, I didn’t think I fit in anywhere, and APTN has accepted me as one of their own. It is always a pleasure to share the stage with such a talented and diverse group of people,” she said.

Francophone musician Kelly Bado, who is performing at IDL for the first time, is also excited to be featured.

“I was so honoured and blessed to be invited to share my music and my culture. The earth is what holds us together, so this invitation shows unity in diversity,” said Bado. “In a way, [APTN Indigenous Day Live] is like celebrating with my brothers and sisters.”

When she took the stage, Bado found she was able to deliver her usual exuberant performance.

“It’s always great to have enough space to move and dance. The crew was the nicest, the makeup artists, the production staff, the camera operators… everyone! It was amazing,” she said.

Kennedy is looking forward to having his work televised. “I do not think my artwork has ever been showcased on a broadcast before,” he said.

Kennedy reflected on the importance of the winter solstice. “In my teachings, this is the time when our mother the Earth takes a rest. We see that change in the land as everything slows down and grows cold. This season is significant to me because it provides us an environment to rest and reflect on our year—that is, of course, if we allow it to,” he said.

APTN Indigenous Day Live is typically held around the summer solstice but had to be postponed. Concerts around the world were abruptly cancelled in March, which came as a shock to musicians everywhere.

“I could not have ever imagined a scenario where every stage in the world went dark on the same day, but here we are. Waiting. All of us in the gig and gathering culture [are] waiting for the green light to turn back on,” said Doyle.

Concert broadcasts like IDL Winter Solstice have provided a socially-distanced performance outlet for musicians. While the pandemic has been uniquely challenging for musicians whose livelihoods and lifestyles revolve around touring and performing, it has also been an unexpected boon for creativity and family time.

“Spiritually, I have been both darkened by the days forced off the stage and enlightened by the forced time at home with my family. Funny how a curse can make you feel blessed,” Doyle added.

Kelly Bado’s latest album’s recording was delayed due to the pandemic, but she took the time to improve her lyrics and work on her online presence. “Essentially, I’ve been doing all the things that we are too busy to do because we are on the road or performing,” she said.

Bado has also been staying creative with her 14-month-old son. “He loves playing with my instruments. We sing together sometimes—or at least he tries to in his own language.” Despite the stress of raising a newborn and supporting his family during a pandemic, Tehatsistahawi Kennedy has been able to delve deeper into his own creativity.

“I have actually seen an increase in the success of my artistic career throughout this pandemic. I’ve come to learn that the vision of an artist is not limited to the ability to look outwards and depict the world around them; it also includes the ability to look inwards and gaze upon their own being as a source of inspiration,” he said. “Because of this realization, I have improved on the intricacy of my artwork and the subjects I choose to illustrate. The improvements to myself as an artist in the past months were only made due to the pandemic.”

Some artists, like Carolina East, have preferred to look outward for creative support. “Creativity has been a struggle during the pandemic, but I have an amazing team that always keeps me on task and encourages me to keep creating content. Most of my close friends are all involved in the music industry, so all our dinner parties (within our bubble) have always resulted in some great music,” she said.

East hopes to carry the support she’s received through the screen. She seeks “to inspire people of all ages to reach for their dreams no matter the challenges that may be ahead. And let’s face it… 2020 has taught us that life can be HARD, but we can always figure it out and achieve great things.”

Visit aptn.ca/schedule for your regional broadcast times. Broadcasts will be available on the APTN lumi streaming platform 24 hours after airing on TV.